5thTurtle: A look at the man behind the shell

Video games and cartoons were not just fun and games for 5thTurtle (real name Carlos Benitez), they were his inspiration and introduction into the world of art. Growing up, Benitez would see other kids drawing Mortal Kombat characters, and he looked up to Christopher Cayco, the illustrator of the Marvel vs. Capcom series. Speaking of heroes, yes, his name is a clear homage to our favorite turtles in a half shell, with Benitez seeing himself as the 5th turtle!

To this day, the doodling has not stopped. Hypesheep, one of his earliest releases, was hilariously dreamt up as an office doodle from his 9-to-5. Most recently, Benitez has moved on to the world of 3D, regularly releasing some incredibly popular resin sculpts, like Angie the anglerfish. In fact, he just unveiled a gruesome pair: Jack & Jill, the pumpkin duo, here just in time for the spooky season.

With a plethora of original characters, you must be wondering what drives this man. Benitez is constantly trying to better his art and challenge himself. The concepts are drawn, molded, and cast by his own hand, which gives him a true connection to every one of his pieces.

With constant sellouts and being a collector himself, Benitez understands what it’s like to miss out on a drop. He gets it. But keep in mind that he always has something new in the works to look forward to! Just the fact that Benitez can constantly create is something that he is always thankful for; however, those who own a slice of 5thTurtle will no doubt agree that they are the ones who should be thanking him!

As one final thank you, here is a little sneak peak for all you Invaders out there!  This is an XL Chamba with an appetite for Dead Dreamers!  As if the piece itself was not exciting enough, look at that glow!

5thTurtle will be releasing the Jack & Jill pumpkins on his website this coming week. Singles are priced at $25, and the pair for $40. 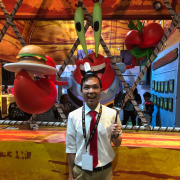 From the Imagination of LTNC Comes ‘HIPHOP IS DEAD’